To say that the Wells family was shocked to discover that Bimbo was living just a few miles away at the National Zoo is a serious understatement. Kenneth and Margaretta Wells, along with their two children, had spent four years in Chiang Mai, Thailand, where the Reverend Dr. Kenneth served as headmaster of the Prince Royal’s College, a Presbyterian missionary school. They returned to the United States in 1951, making the DC area their home.

While living in Thailand, the Wells family adopted a black white-handed gibbon named Bimbo, who loved playing with the Wells children and students at the school, generating laughs with her antics, and tormenting the neighborhood pets. She developed a fondness for fresh pineapple and expensive British chocolates and would join the Wells family for waffle breakfasts. (It would take her days to lick all of the syrup out of her fur!) Bimbo was family.

A home video by the Wells family. Bimbo appears at the beginning of the clip. Source: Presbyterian Historical Society

After four years in Thailand, it was time for the Wellses to return to the United States. Unable to take Bimbo with them, the heartbroken Wells family arranged for the gibbon to live with friends, with the understanding that if they could not care for her that they would find her a good, loving home. They tearfully said their goodbyes to Bimbo and Thailand.

Fifteen months later, when the daily Washington Post arrived at the Wells’s home in Arlington, Virginia, Kenneth showed his family a large photo of a gibbon that accompanied a story about new arrivals from Thailand at the National Zoo. “That looks like Bimbo,” he commented. His eighteen-year-old daughter exclaimed that it HAD to be Bimbo—“No other gibbon looks like Bimbo!” Roberta’s mother told her not to get her hopes up too high, that there is a very slim chance that it was actually Bimbo—after all, Thailand was full of black gibbons. Their curiosity highly peaked, the Wells family enthusiastically journeyed into the city to visit the new zoo arrival.

Their initial attempts to engage with the gibbon proved unsuccessful due to heavy crowds. Not giving up, the next day Kenneth contacted Ernest P. Walker, the assistant director of the zoo. Wells recounted their story and inquired about the possibility of meeting the gibbon early in the morning before the crowds descended upon the zoo. Agreeing but dubious, Walker explained that the gibbon was indeed purchased from a dealer in Bangkok, but that he was unaware of how the gibbon would have made its way from Chiang Mai in northern Thailand to Bangkok near the coast—a 400-mile distance. Could it really be Bimbo? 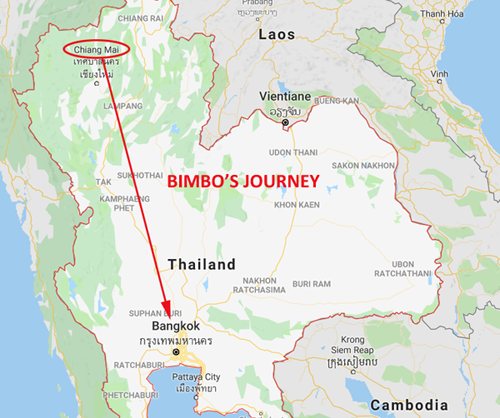 On a Friday morning, the Wells family met Walker at the Small Mammal House. Clutching a tin of pineapple and a box of chocolates, the children began calling out to the gibbon with the endearing coos that they used back in Thailand. But would she remember after fifteen months and in a completely different setting? Bimbo immediately started crying and attempted to hug Roberta through the bars. She then gobbled down her favorite, familiar treats. Roberta asked Walker if she could enter the enclosure to make sure there was no question of Bimbo’s identity; Walker agreed, offering safety warnings. Within seconds of the Wellses entering the gibbon space, Bimbo latched onto both children tightly and cried softly. Everyone was in tears. Roberta then rubbed Bimbo just under her eyebrows—a gesture that gibbons normally despise but Bimbo grew to love. Bimbo refused to let go of them. That was enough to convince Walker. (He did draw the line at using waffles and syrup as proof.)

That is the first time I’ve seen a gibbon enjoying English creams. She is yours without a doubt.

The story of this amazing reunion attracted national press. The Wells family returned to the zoo for a photo shoot, and Margaretta Wells penned an article about the reunion, which appeared in the July 1953 issue of National Geographic. (This article includes thirteen fantastic photos of the Wells family with Bimbo.) Visitors flocked to the Small Mammal House to catch a glimpse of the celebrity gibbon.

The Wells family enjoyed regular visits with Bimbo. She often had to forgo her chocolate treats with other gibbons lurking, but I’m sure knowing that her “family” was close it made her life at the National Zoo, half a world from her homeland, a much happier one.